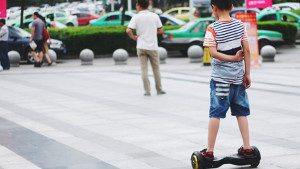 Hoverboards may pose a serious risk of fire.

Hoverboards, a sought-after gift during the 2015 holiday season – now sit in millions of households across the country. But homeowners should take extra caution in storing them, and may want to reconsider the potential danger they present.

First, hoverboards don’t actually hover. They are self-balancing, wheeled scooters that are powered by lithium-ion batteries and resemble a skateboard. They are sometimes referred to as self-balancing boards or smartboards. Hoverboards are smaller than the self-balancing scooters introduced a decade ago, and the lower price has made them a huge hit.

WHAT’S SO DANGEROUS ABOUT HOVERBOARDS?

If you keep an eye on the news, you know that in addition to falls resulting in concussions, broken bones and other serious injuries, there have been numerous reports of hoverboard fires.

Among the reported fires, there are several different circumstances in which these boards ignited or exploded. They have gone up in flames while charging, while being ridden and even while sitting idle. Aside from the obvious danger of physical harm from fire, the boards are causing extensive property damage, and in some cases people have lost their homes. A memo from the Consumer Product Safety Commission on February 18, 2016, stated that from December 1, 2015, through February 17, 2016, CPSC received reports from consumers in 24 states of 52 self-balancing scooter fires resulting in more than $2 million in property damage, including the destruction of two homes and an automobile.

WHAT CAN BE DONE TO PREVENT FIRE?

Hoverboards and their batteries are manufactured overseas, and the sources of parts are difficult to trace, making it impossible to guarantee that any hoverboard is safe. U.S. Customs and Border Protection officers continue to seize shipments of counterfeit and dangerous products. Some hoverboard brands were sold with counterfeit marks from Underwriters Laboratories, giving consumers the false impression that the boards were safe. UL provides additional information and a safety tips video on its website.

The CPSC offers these tips to reduce the risk of an incident:

The CPSC issued a statement in December 2015 pledging to continue to research the causes of the incidents and urging consumers to take safety precautions. The National Fire Protection Association also issued consumer guidelines and recently published an updated analysis. Consumers can report incidents and unsafe products to the CPSC at saferproducts.gov.

Since December, several major retailers have stopped selling hoverboards, and major airlines have placed restrictions on transporting them in checked or carry-on baggage. Many local public transportation systems have also banned hoverboards on buses, trains and other vehicles, and many colleges have barred them from campuses.  Due to the potential fire danger,  University of Colorado has banned  them from their dorms.

Consumers considering buying hoverboards or keeping them in their homes should take note that as of the publication date of this blog, Underwriters Laboratories has yet to certify the safety of any hoverboard brand.

This loss control information is advisory only. The authors assume no responsibility for management or control of loss control activities. Not all exposures are identified in this article. Bolder Insurance is a  indepdent insurance agency offering both personal and business insurance.