The following articles was published in the Daily Camera, April 17, 2017 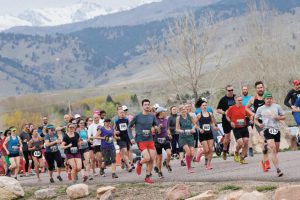 Runners participate in the Dash & Dine 5k series, runs that are official qualifying races of the Bolder Boulder 10k. Running a low-key race such as the Tuesday evening Dash & Dine series is an efficient way to get in a tempo run in preparation for the Memorial Day Bolder Boulder 10K. (David Albo / Courtesy photo)

While only one runner out there is going to win the Memorial Day Bolder Boulder 10K —- and no, it is likely not going to be me or you —- the rest of us can “win” by reaching our own personal goals that provide a sense of satisfaction and accomplishment. These can range from simply covering the entire 6.2 mile distance for the first time to setting a personal best on the course.

One key goal for many Bolder entrants is qualifying for one of the first 32 “waves,” or starting groups of the 100 total that will set off at varying time intervals Memorial Day morning.

Non-runners might ask, “What difference does it make if someone starts in the ‘C’ or the ‘EE’ wave?” I can say it makes a big difference. The last time I raced the Bolder Boulder, I felt first-hand how good it felt to get the “AA” qualifier, meaning I could run on the Boulder Road Runners team.

The most important reason for training for and getting a wave qualifier is what Todd Straka calls the “Goldilocks” effect.

“It is like Goldilocks,” said Straka, an “A” wave qualifier who puts on the weekly Tuesday night Dash & Dine 5k race series at Boulder Reservoir. “You are running with people who are not too fast for your pace and not too slow so that you have to move around them. Everyone (in a respective wave) is around the same pace and flow, and you can use that energy of your wave to keep your mind off the hard work and keep you running relaxed and fast.”

In the six weeks left until race day, you will likely want to practice running relaxed at a fast pace with a workout known as a “tempo run.” These are also called “sustained runs,” or “AT” workouts, short for “anaerobic-threshold.” This is a workout used by coaches of all levels, that can give you a big return on the time you put in.

The beauty of the workout is its simplicity.

It can be done on any surface in most any condition. After a 10-minute warm-up, roll into a pace just below your anaerobic threshold (the point where your body changes from aerobic to anaerobic respiration) for a sustained amount of time.

Twenty minutes seems to be standard, although Brent Friesth, head of Bolder Boulder sponsor Boulder Insurance, used to do weekly 10-mile tempo runs, taking 51 to 53 minutes. If you cannot run as fast as Friesth did (don’t worry, he can’t anymore, either), then how do you determine at what pace to run this workout?

The late coach David Welch used to advise his athletes to go at their “fastest sustainable pace.”

Or, simply run at a pace where you can no longer comfortably carry on a conversation with your training partner.

Jog past the University of Colorado Potts Field outdoor track some early morning, and you might come across Buffs coach Mark Wetmore putting his runners through this workout. “Change your shoes, do a 4-mile AT run, and you can get back to the office in time to eat a sandwich,” Wetmore said once, as we watched former CU star and Olympian Adam Goucher go through a tempo run of 4 miles in under 20 minutes.

A word of warning from former World Championship gold medalist Mark Plaatjes, who often ran this workout in his heyday as a 2 hour, 8 minute marathoner. A tempo run is a workout, not a race. Do it correctly, and “it is one of the most effective and efficient ways of training.”

Finally, there is another, more subtle benefit to adding tempo runs to your training, said Ewen North of Revolution Running, which will have coaches at the Dash & Dine every Tuesday, helping runners warm- up for the 5k.

“It is psychological as well as physical,” said North. “It can help get you mentally ready to race.”

Note: The penultimate Dash & Dine, on May 18, is the official Bolder Boulder qualifier race. Race officials will be on hand with official wave assignments, registration and bib exchanges, for those runners who registered early and then turned in a faster wave time and want to move up. Details: bolderboulder.com or dashndine5k.com.