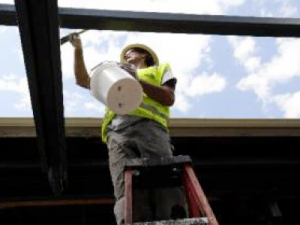 Whitestone Construction worker Greg Suttles, of Arvada, paints under the structure built for the awning on Front Street in Louisville on June 7. The awning will provide shade for the upcoming Street Faires, which kick off Friday, June 15. ( Rachel Woolf/For Hometown Weekly)

That’s what the ninth annual Louisville Downtown Street Faire, which kicks off for 10 consecutive weeks Friday, June 15, promises this year.

“We have a fantastic summer band lineup that is unmatched anywhere on the Front Range,” said Ronda Grassi, a downtown Louisville business owner who is one of the Street Faire’s primary organizers.