The Rise Of The Drone 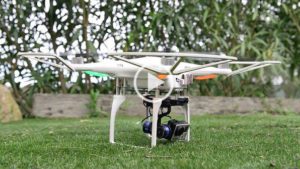 You’ve seen news articles on them. You’ve seen posts on the internet about them. You might even have seen them flying around your neighborhood. Perhaps on Halloween you’ve seen a flying apparatus with a ghost attached to it floating down your street, or perhaps you’ve seen something flying above your house and wondered if a camera was taking pictures of you. These unmanned aircraft systems (UASes), also known as drones, are aircraft systems without a human pilot on board. Instead, they are controlled by an operator on the ground.

If you haven’t seen one in action yet, just wait. Hobbyists purchased about 1.9 million drones in 2016, and the Federal Aviation Administration estimates that purchases might grow to as many as 4.3 million by 2020.

Businesses are also beginning to purchase drones for commercial purposes, with the number expected to grow from 600,000 in 2016 to 2.7 million by 2020, according to the FAA. Companies are turning to drones for aerial photography, real estate, construction, agriculture, advertising, search and rescue, landscaping, insurance and many other uses.

When entering into the world of drones, a number of rules and regulations must be followed, some of which are detailed on the FAA’s UAS website and Fact Sheet on Small Unmanned Aircraft Regulations.

In August 2016, the FAA implemented a UAS rule known as Part 107, which applies to small drones weighing 55 pounds or less and requires operators to fly under 400 feet within visual line of sight and only during daylight hours. If businesses wish to fly outside of these parameters, then a waiver may be requested. According to the Association for Unmanned Vehicle Systems International (AUVSI), most waiver requests come from California, are for nighttime operation and involve the aerial photography industry.

Several potential liability issues are involved in the use of drones:

While claims resulting from bodily injury and property damage have established legal precedents for recovery of damages, case law involving personal injury or advertising injury claims resulting from drone usage is relatively new and undeveloped, and your business may be exposed to exposures such as trespass and nuisance whether the drone is owned, operated or hired depending on the facts of the case.

Individuals and businesses that choose to operate drones should evaluate their potential exposures and the limitations and any gaps within their traditional insurance policies. Your local, independent Bolder Insurance Agent can help you determine what insurance options are available to you.

Drones are up and coming and, if the predictions hold true, will be used with increasing frequency in both personal and business capacities. Prior to purchasing or using one for your home or business, make sure to check the rules and regulations for operation and consider the corresponding liability exposures.